B-Mama and I both love our minivans. Maybe because we've never been car people? Maybe because I lack perspective? After all, my nicest set of wheels prior to owning our minivan was a 92' Honda Accord (I drove this from 1999-2007). And that Honda was a huge upgrade from the 92' Ford Taurus Station Wagon I used to drive. Below is a picture of that beautiful car. Mr. Red actually drove this baby to work for about a year. I think his boss wanted him to park it in the lot next door (notice the missing bumper?!?) 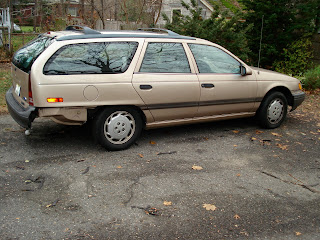 So when we bought our used 2005 Honda Odyssey in 2008, I felt like I was driving a BMW. I love my minivan and I am very aware that someday I may have to drive something even bigger, so for right now, I'm feeling pretty cool in my car.

And then a fellow mom friend sent me this hilarious video. As a shout out to all those playground mamas lamenting the jump from SUV to minivan, this video is for you. Have you seen this? Hilarious.

Red, LOL. I've seen the commercials, but never the rap. So funny!! You know I can't wait to buy a Swagger Wagon?! Seriously. I can't wait.

I love this video. My husband sent me the link a couple months ago to make me feel better about the need for just such a van with #4 to be born in the fall. Honestly, I can't wait for a bigger car, bring on the swagger wagon!

Always so interesting to visit your site.What a great info, thank you for sharing. this will help me so much in my learning.
security equipment

westbrook jersey
kevin durant jersey
Serge Ibaka Jersey
luxury allowance’, no one could gather to himself masses of choice articles which it was beyond his power to use or appreciate. Thus the more flamboyant kinds of clothing, though not banned,

Booklists and other ideas:

Nine young, Catholic mothers who graduated from Princeton University, seeking to build our families just as the architects of the great cathedrals built their detailed masterpieces: day by day, stone by stone, with attention to details that only He will see.

Nine bachelors degrees, six advanced degrees, and 200+ combined months of pregnancy have only convinced us of how much we have left to learn in matters of faith, family and vocation. We adhere wholeheartedly to every doctrine of the Holy Catholic Church, but the details beyond that, from co-sleepers and breast pumps to schooling options and professional life, are grounds for robust discussion with like-minded friends. Nothing written on this blog is intended to incite maternal guilt, anger or to advise on medical or legal matters. Virgin most prudent, pray for us!

"A mother is the most important person on earth. She cannot claim the honor of having built Notre Dame Cathedral. She need not. She has built something more magnificent than any Cathedral -- a dwelling for an immortal soul, the tiny perfection of her baby's body." -- Joseph Cardinal Mindszenty (as quoted by Danielle Bean)

"As mothers, we are building great cathedrals. We cannot be seen if we're doing it right. And one day, it is very possible that the world will marvel, not only at what we have built, but at the beauty that has been added to the world by the sacrifices of invisible women."--Nicole Johnson, The Invisible Woman